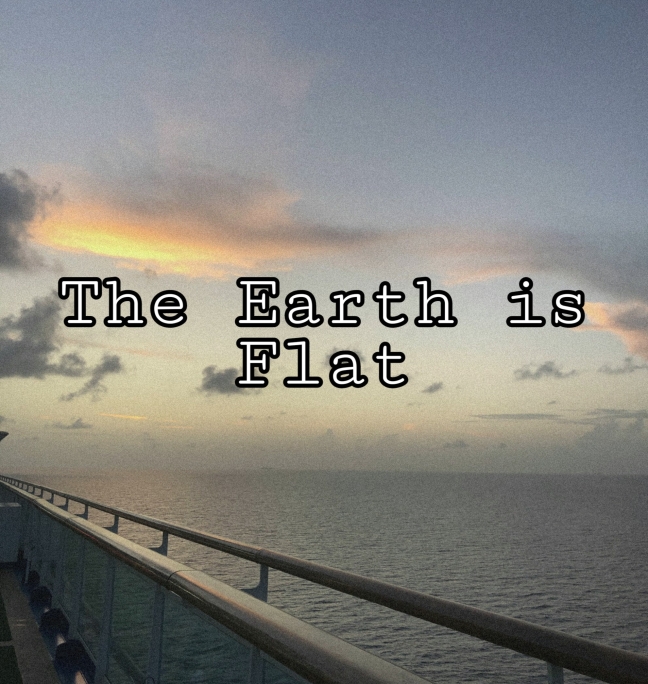 Really, guys, I’ve come to the conclusion that the Earth is flat. I’m just joking; but I can see why people did, and still do, believe so.

I was on a cruise this past week, and it was absolutely amazing! We had gotten an exterior stateroom, so we had a balcony. My favorite thing to do was just going out on that balcony; I did it as often as I could. I never tired of the crashing waves, the endless sea of blue. How could I? It was breathtaking. It made me feel like I could do anything, and about how much I don’t know. There is so much thriving beneath the water, so much beauty. If allowed, I could stand at that balcony staring out for hours on end. More than all that, it made me feel insignificant. When I stood, transfixed by the deep blue of the ever-moving waves that went on in every direction, I thought about how that ocean, that sight, is always there. Regardless of what I’m doing or where I am, it is always there.

Despite my hopelessly minuscule problems and worries, doubts and fears, that view is always there. That ocean is always there, thriving in spite of me, in spite of humans. I don’t know why, but that’s incredibly comforting to me. That there’s so much more going on than just in my life. Not just the ocean, but everywhere. That is why I write. Because of how overwhelmingly big the world is. When I write, it’s like I’m putting myself in someone else’s shoes. Someone else’s life. I’m not limited to just my experiences. That is a major responsibility. You’re representing a culture, maybe, or a lifestyle or religion or simply way of thinking that isn’t yours. That needs to be treated with respect. The way I see it, that’s not only a huge responsibility, but an honor. To not merely learn, but to represent people who don’t exist, but who’s stories do. Well, I suppose it does, obviously, depend on what you write about, but it does apply in most cases.

I write because it gives me the same feeling that looking out at the ocean gives me. That there’s so much more than just my life, my limited experiences.

All that being said, I can also understand that flat-earthers. Looking out at the ocean, there’s the horizon, that cuts it off, far in the distance. A straight line that goes all the way across, seemingly marking the end. No more ocean after that. No more world. All the ocean you can see, before that; is almost incomprehensibly enormous, it’s difficult to imagine there can be even more. When I looked at it, especially from the balcony, it sort of looks like a snow globe. The ocean, a carpet of shifting water, the sky, perfectly rounded; above everything. When you look at it, the effect is very much like what I would imagine being on the inside of a snow globe is like. That’s so much ocean to begin with, so much to wrap our heads around, it’s hard to believe there could be more. It seems impossible that there could be more than what you see. But there is another half; like two snow globes conjoined together. Earth isn’t a snow globe, its a sphere. That half you can see? Crazy as it sounds, there’s a whole other one! All that ‘world’, all that life, and there’s still a second half.

I get it, it’s easy to see the Earth as a snow globe. It easy to picture yourself as the singular little figurine inside. Its easy to feel like you’re the only one, like the world is always against you. Like the world is always being shaken up, and you’re at the center of it. But, as a writer, and in life, you have to imagine the other half. You have to realize that there’s more than just you. There’s more than your struggles and hardships. For every problem you have, there’s someone out there with twenty more. There’s someone out there who can’t afford to live in a snow globe. You need to think bigger than just what meets the eye, and that’s when you’ll truly be able to write. When you can think further than just you. If you believe the earth is flat, that’s great, don’t read too much into this post. Toodles, and have fun breaking out of your snow globes!

“Life is not measured by the number of breaths we take, but by the moments that take our breath away.“

4 thoughts on “The Earth is Flat”