I’m super excited for today’s post- I got to interview author Carynn Bohley about her writing process, and her recently published novevlla- ‘Dear Jackson’! I mean, I would hope you’d have gathered that from the title, but I have a knack for stating the obvious.

Firstly, I’m not only excited because this is the first interview on my blog, and of a teen writer! I’m super excited about that, but more so that I got to interview Carynn! She is such a talented writer, and I really enjoyed her book.

Moreover, something I think even she doesn’t know is that Carynn is the reason I got into blogging in the first place. Last year, I decided I wanted to become more serious about my writing, and actively work towards finishing a full length novel. In my quest through the internet to find this something that would suddenly make me believe in my own writing, or make me more willing to write more consistently, I happened on Carynn’s blog (which you can find here). I read some of her posts, and thought that it was so cool that a teenager could have a writing blog! It made me come to the realization that I didn’t want to wait to work on my writing until I turned some magic age. I wanted to start now. A part of that, was starting my very own blog. And so I did. So it’s super cool for me to have been able to interview Carynn about her novel, when she’s apart of the reason I started my blog in the first place.

‘Dear Jackson’ is the story of Malcolm Gibbs, who moves to rural Kentucky with his Mom and little sister Annie when his parents divorce. The news of his brother Jackson’s death leads him to write a log addressed to his deceased brother. Malcolm’s new life in Kentucky isn’t without many twists, turns, and of course, the charming new neighbor, Bella. If you want to know more, READ THE BOOK! (Seriously read it, it’s so good)

Without further ado, the interview! (Hey, that rhymes!)

Q: How did you get the idea for Dear Jackson?

A: The plot actually came to me in two parts. I was outside bringing some hay to my family’s old horse, Liberty. I drove it over to her pasture in our army green, mud-splattered quad (sound familiar?), and that’s when I began to brainstorm. I imagined that some mysterious neighbor had moved in next door, and wondered what I looked like from their point of view. Later that day I was struck by another idea: Wouldn’t it be so sad if someone addressed their diary to a deceased lover? When I actually outlined the book, I decided that the main character would write the log for his deceased brother, instead.

Here’s a fun fact that I’ve actually never told anyone: The book was originally titled ‘Dear Grayson,’ and Malcolm’s name was Jack!

Q: Which character did you feel was the most like you?

A: I’m a perfect mix between Malcolm and Bella. Like Malcolm, I tend to overthink everything, and sometimes I have trouble expressing how I really feel.

I’m more like Bella when it comes to how I act and also my accomplishments. Both of us were homeschooled and graduated high school early, we’re energetic and competitive, and good at many things at once. This is also our downfall, because it can be hard to focus on one hobby.

A: I actually started the book in the fall of 2018, and finished it a week after I began. I didn’t do anything with it for a few months, until I decided to put it on Wattpad. It was about a year before I re-read it, and I broke out crying at the end. That was when I knew that I shouldn’t have abandoned it. Edits took about two months, as I had several beta readers who reviewed and critiqued it. I finally published it in January of this year, and I’ve still found a few errors I’ve had to fix.

Q: How do you feel being a ‘young writer’ affects you? Positively, negatively? What kind of obstacles do you think you face unique to being a young writer?

A: On the positive side, it gives me lots of time to learn and improve before I enter the ‘real world.’ I will also be applying to colleges this fall, and being an author will look great on my application. The only negative that I can think of is people not taking me seriously. In the world of traditional publishing (and basically any other profession), time is money. Many agents and publishing companies don’t like to represent new authors because of the lack of experience, which can slow down the process. Being a young writer- especially someone under the age of 18- is definitely seen as a red flag.

Q: How do you battle writers block?

A: I have tried several methods over the years, and there isn’t one ‘right way.’ I’ve discovered that writers block (for me at least) tends to occur for certain reasons, and once you find the reason, you can work at getting rid of it.

I recently took a break from my current novel because I was about to write an intense scene and didn’t know how to begin. The main character had just fallen asleep, and I wanted her to wake abruptly to the sound of an invader walking through the house. Since there have been many parts of the story where she’s fallen asleep and woken up, I was running out of unique ways to describe it. After a week or two, I knew that I had to stop procrastinating. I decided to write a skeleton version of the next few scenes, just so that I could be sure of the basic structure of the story. Since I didn’t have to write any descriptions or dialogue, I was able to get very far with no signs of writers block. Then I went back and elaborated on each sentence, and quickly finished two chapters in one sitting.

You can also try making a Pinterest board or Spotify playlist to put you in the mood. This has worked for me multiple times. Just remember that if you can’t inspire yourself to write, you can still write. Sometimes just working through a tough scene will help you to gain momentum, and your writers block will disappear as a result.

Q: What methods do you use to plan your novel?

A: I have found that I am very bad at writing on the fly. Vague plot points don’t work for me. If I want to finish my project, I have to outline it very specifically. I like to use a plot outline chart by Stephanie Morrill (author of Within These Lines, Lost Girl of Astor Street and more). I’ve used it for every project I’ve worked on for almost two years, and it’s never failed me. HERE is the link if you want to check it out.

Q: How did you find the publishing process?

A: For most of my life, I never considered publishing. I have been writing books since I was five (I actually just recently found several of my old stories… Let’s just say I’ve improved a lot over the years). During Camp NaNoWriMo in 2018, I wrote my first full-length novel, a 60,000 word scifi called Nevada Confidential.

At the time, I was part of a writing group at my local library, and I’m pretty sure I was the only person under the age of 40. The other members were very encouraging, and one of them even agreed to edit Nevada Confidential for me. I received a book for Christmas that year called Go Teen Writers: Edit Your Novel. I learned a lot about the publishing world from that, and then I began to do my own research. I honestly had no idea how uneducated I was on the publishing world back then. I ended up abandoning Nevada Confidential after a particularly harsh critique I received, because I had yet to understand the subjectivity of writing. I moved on to a new project, a novella called Darkness Rise. I wrote it shortly after I wrote Dear Jackson, and within a month I sent out seven query letters. I got all rejections, and I was devastated. I abandoned yet another book.

With Dear Jackson, I planned on traditionally publishing. I sent out query letters as before, and I had two agents tell me that no one would be willing to represent a novella. I could have continued my search, but I was afraid that I’d end up giving up again. At this point I’d self-published two Amazon short reads just for fun, so I decided to do the same with Dear Jackson. I’m currently re-writing Darkness Rise as a novel, and I plan to try traditional publishing again, this time as a project for my college Honors Program. That way, I can’t give up!

Q: Do you have any horses of your own? (In Dear Jackson, the character Bella has a horse named Blue)

A: As I mentioned in the beginning, my family did have a horse named Liberty. We’d dreamed of being horse owners for most of my life, and finally the dream came true. However, we’d never had a horse before, and Liberty was a snobby ex-polo horse. She knew that she was better than us, and it was clear in her behavior. She was stubborn, and she even bucked my dad off of her back when he was riding her once. We eventually realized that we couldn’t give her the training and experience-level she was used to, so after about a year we ended up selling her. I don’t think we’ll be getting another horse in the near future, but if we do, it’ll be a gentle old trail horse. I’m not sure we could handle another diva- though Annie would love her!

I’m so glad I got to interview Carynn, you can get ‘Dear Jackson’ HERE!

If my rating wasn’t already clear…

I give it 5 stars! Please go read it! 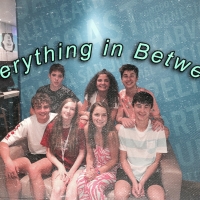 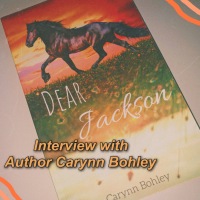 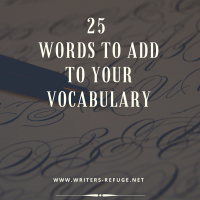 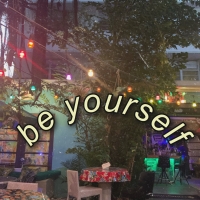